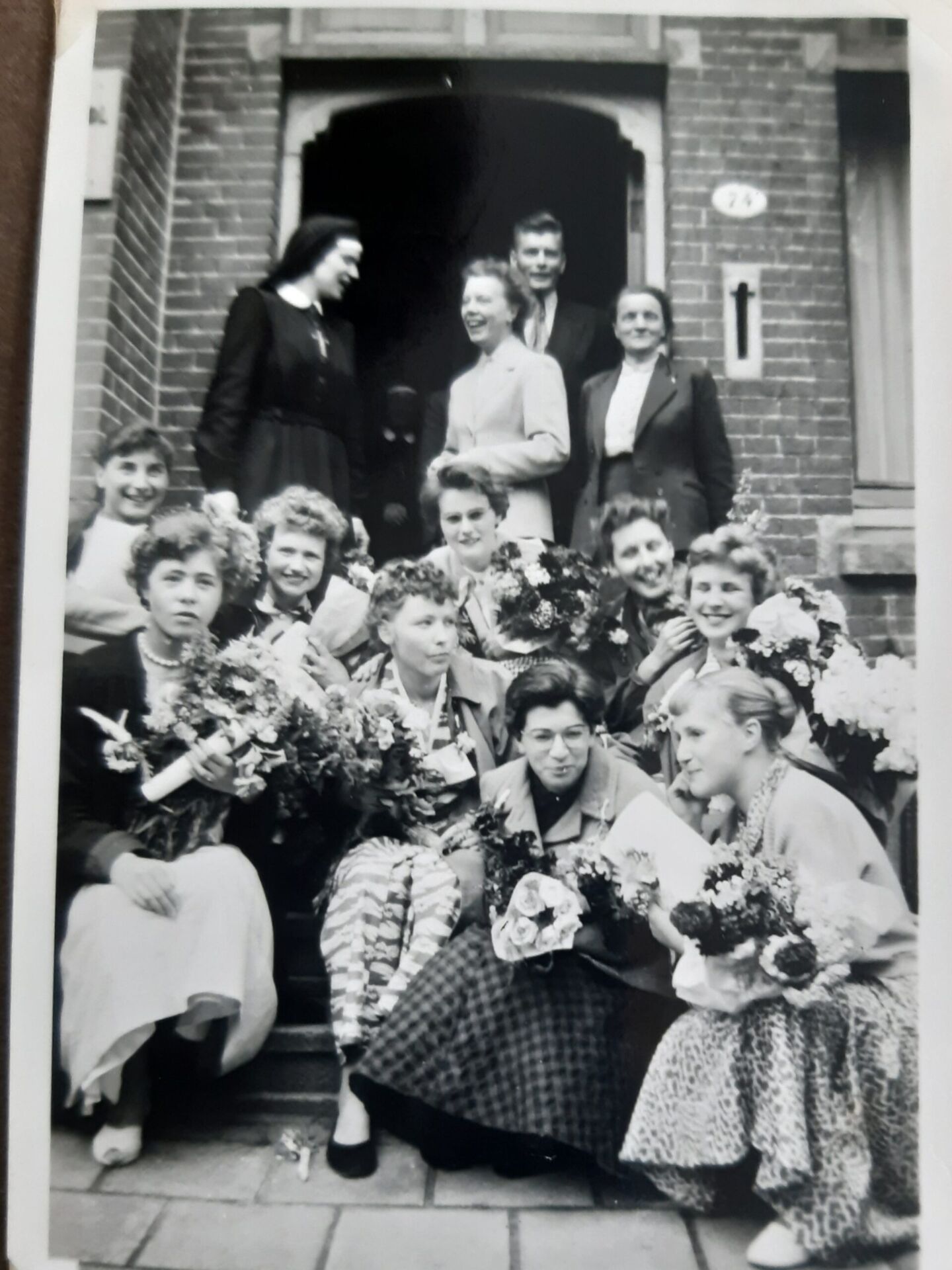 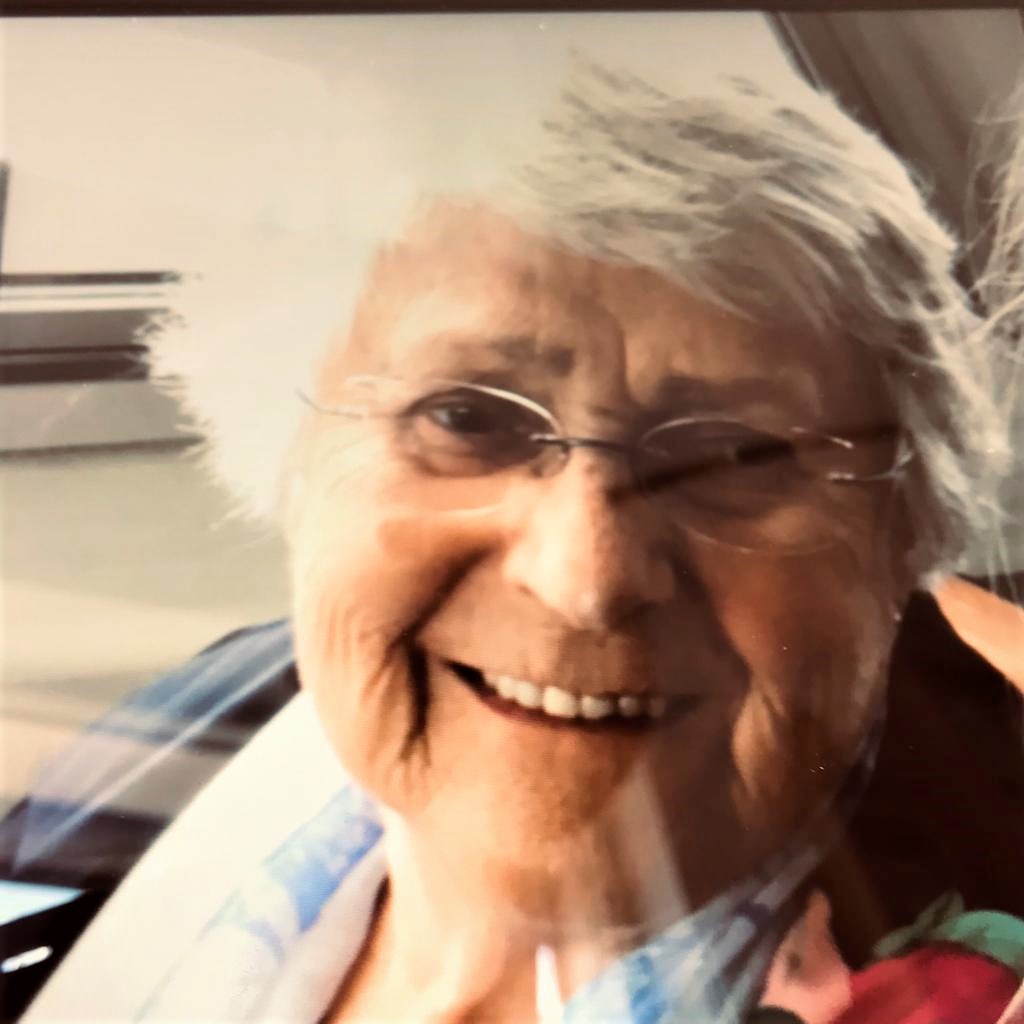 My opposite neighbor Henny was a student at the MMS Sint Walburg at the Kraneweg in Groningen from 1950 to 1955. By coincidence we found out that we both have a connection with Catholic education in Groningen: she as a student and I as a teacher.

Although Henny is not really a former student of the Sint Maartenscollege we talked with each other about – so to say – the predecessor of the later MMS in building De Wijert.
It became a fascinating conversation with a lady who still remembers her school period at the Kraneweg incredibly well, where Sister José ruled the roost and where long pants were out of the question, unless a skirt was worn over them, but if you behaved ladylike, then long pants were allowed. But no hands in pockets and no sitting wide-legged!

“It was a very nice school! You got broad general development there!”
Before the first question is asked, I should note this.

Her father did not think it necessary, that she went to MMS, the Mulo was good enough, but Henny’s mother did not agree. Henny did entrance exam and passed as the best of all candidates.
The family had moved from Oosterbeek to Haren, so Henny cycled to Groningen, unless it was slippery in winter, in which case she took the bus. This caused some problems, because if the bus was full, the driver would leave the students standing, so that she came too late many times and was thus (!) punished. She didn’t think this was right, because she couldn’t help it if the bus didn’t stop.
“So I didn’t do the punishment work, it was doubled and this went on until I had to write the whole book over. That was too much for me and I went to Sr José, who said: “You don’t have to do it, but it won’t be spoken about anymore.”
That’s how our principal was, fair to the students, but she also protected her teachers.”

It characterized this lady, she had an eye for her students and made sure they felt comfortable at the Kraneweg. Sister José taught history and Henny loved her lessons!
She corresponded with her for a long time, even after she had retired and found a new job elsewhere in the country.

Besides history, Henny also loved the French lessons of Mr. De Haan! Although they spoke French in class, they listened to gramophone records. Wonderful lessons!
French was her first exam subject, she was very nervous and De Haan probably was too, because it was the first exam he took. It ended well for both of them, she got a 7 and the teacher was satisfied.

She also remembers some other teachers very well, the chemistry and physics lessons of Gerard Korfage were fantastic! They were not exam subjects, so Gerard made a good job of it, sometimes his lessons seemed like theater rehearsals…. That’s what he was good at: directing and acting and especially having fun.
She also remembers a less cheerful incident: her Dutch teacher suffered a stomach bleed during a test. Everyone was shocked, of course, and there was a lot of cheating, but that was over in a flash because of all the consternation.

Occasionally one went to Communion. You had to appear sober in a cramped chapel, where she once collapsed and was carried off by a teacher. Well, she didn’t mind that at all!

In the fourth year a retreat in the monastery of Witmarsum was on the program, a week of reflection, so to speak. But reflection…….
Henny doesn’t remember much about this trip, but she does remember that the ladies enjoyed themselves with (nightly) fashion shows in nightshirts and babydolls.
The noise was unrelenting and many a young brother regularly called on them to be quiet…..

The average number of students was around 24, but in 1955 only 13 girls took the exam. Unfortunately not all of them passed, which meant that those who failed were not allowed to join them on the carriage ride through town. This caused a wave of indignation among the graduates with the result that the failed girls rode in a car behind the coach and in this way got their tour through the center of Groningen anyway!

After the MMS Henny went to the Rijkskweekschool (state training school) in the Pelsterstraat. The Catholic school was too far away, so the bishop had to grant dispensation, but she got religious lessons from a chaplain, for the Catholic background should not be neglected of course. In the end she also passed her religion exam.

Henny has taught at several elementary school, she was in Dokkum, Hoogezand and Utrecht, but she married in 1961 and could therefore not keep her job.
In Maasbracht, however, she was able to replace a teacher at a Christian skipper’s school for three months, but that was no problem as she had become pregnant herself.
She moved several times, taught for many years, among others at a Jenaplan school in Lelystad, a type of education that appealed to her.
She eventually worked until she was 61 and then took early retirement. It still existed at that time……