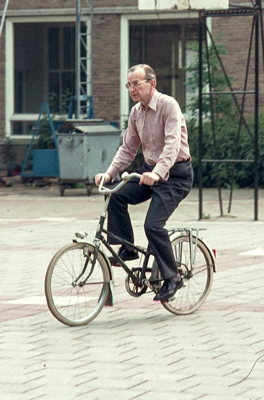 Father Muskens was not only a unique person but also a well-respected man: wise, capable, no-nonsense and deeply interested in those around him. But in a most charming way he could also wrong-foot a person, regardless of their status. His colleagues would find him pleasant and inspiring, but also inscrutable at times.

He was principal of our school in turbulent times – the famous sixties – with controversial social themes such as a shifts in power-balance, participation and social unrest among students. Those were the times of freedom and imagination, personified by young, enthusiastic coordinators and their mentor-teams whom he trusted fully. As a sign of the times he let imagination reign. He supported pupils’ counselling and educational reforms such as Mastery Learning and Remedial Teaching, which made the school popular and sought after among parents and their children.

He was averse to flattery or compliments and simply ‘did his job’. Although he was headmaster and a very good one, he preferred not to be addressed as such. He knew how to delegate because he believed that other people should be trusted with their specialties. He acted the same way in the Wijert-building.

Muskens lived a sober life, disliked festivities and discouraged P.E.-teachers to take part in sports days since there was always a risk there of getting injured. Although the winters tended to be severe in those days, he was reluctant to allow free days for all-school skating excursions, although he sometimes gave in, be it under pressure.

Not only was ‘Mus’ keen to get to know teachers and other staff, he also wanted to know the pupils. And so he could be seen at the top of the stairs every morning, studying the faces of everybody coming up. He preferred to have lunch with as many unknown pupils as possible, so he used to join random tables in the hall at lunchtime and chatted with his fellow-lunchers.

Lots of anecdotes were told about father Muskens, and nobody could tell you whether they were true or not, least of all Mus himself! For quite a while it was a custom among people who held farewell- or thank-you-speeches to commemorate Mus with a saucy anecdote: about his vow of poverty, his wit, his austere lifestyle.

After his retirement in 1977 he devoted himself to mental and pastoral care for the elderly, in the same spirit that had guided him in his educational career: with wisdom, sympathy and humbleness. He also picked up his studies again. Due to his educational career he had not been able to keep up with the latest publications in his original fields of interest: theology, philosophy and classical languages.

The following is a summary of an article father Muskens wrote for the memorial book on the occasion of the 40th anniversary of the school.

1965: the Secondary School for Girls mover to the Wijert-bulding

Two new buildings, conveniently and charmingly situated. But not only the buildings were new, internally there were (revolutionary) renovations as well! It meant the start of parents’ and students’ committees, and also annual student elections and school parties.

The new Education Bill (‘Mammoetwet’) of 1968 provided a new type of school: HAVO, but there was no room for two separate Roman Catholic HAVO’s (one for girls and one for boys), so the only solution was a merger, and father Muskens was to be headmaster of both St. Maartenscollege and the Secondary School for Girls. Teachers taught in both schools and traditional girls’ education came to an end. The new name for both locations was ‘St. Maartenscollege, school for VWO and HAVO’. Forms 1 and 2 went to the Wijert-building (due to the division of labs), and the rest to Haren. The number of pupils grew very rapidly because parents from different denominations started entering their children in our school.

The turbulent sixties also had their effects at school: a democratization wave hit the school, students participated in a diversity of matters, from coffee-machines to various meetings. Each class had a class-teacher or mentor, classes were grouped and supervised by a coordinator, who also met with mentors of that schoolyear on a weekly basis. One of the positive effects of this new organizational structure was more personal and direct contact between school, students and parents. A new post was created: that of extramural coordinator for non-educational activities.

Innovations continued to occur, because a school is continually ‘on the road’ with its staff and student, and because ‘roads tend to wear out’. Jan van Luyn, a teacher of classical languages at the time, wrote an article entitled ‘A school with people on the way’. One of its conclusions was that it seemed easier to merge with another school than to renew people and human relations…

Following the tradition at St. Maartenscollege I will also finish with a personal anecdote about father Muskens. Just before the summer holiday of 1977 a colleague drew my attention to a vacancy at St. Maartenscollege. I phoned and was invited for an interview. Next day I entered the building, which had already been deserted due to the holiday. After an interview with my future German colleagues, I was expected in the headmaster’s office for the official bit. Father Muskens asked a number of questions about my background (not Roman Catholic but Protestant) and gave me a paper to sign. Then he spoke the historic words: ‘The job is yours, I wish you good luck. By the way, you are my very last official deed. I am retiring NOW!’