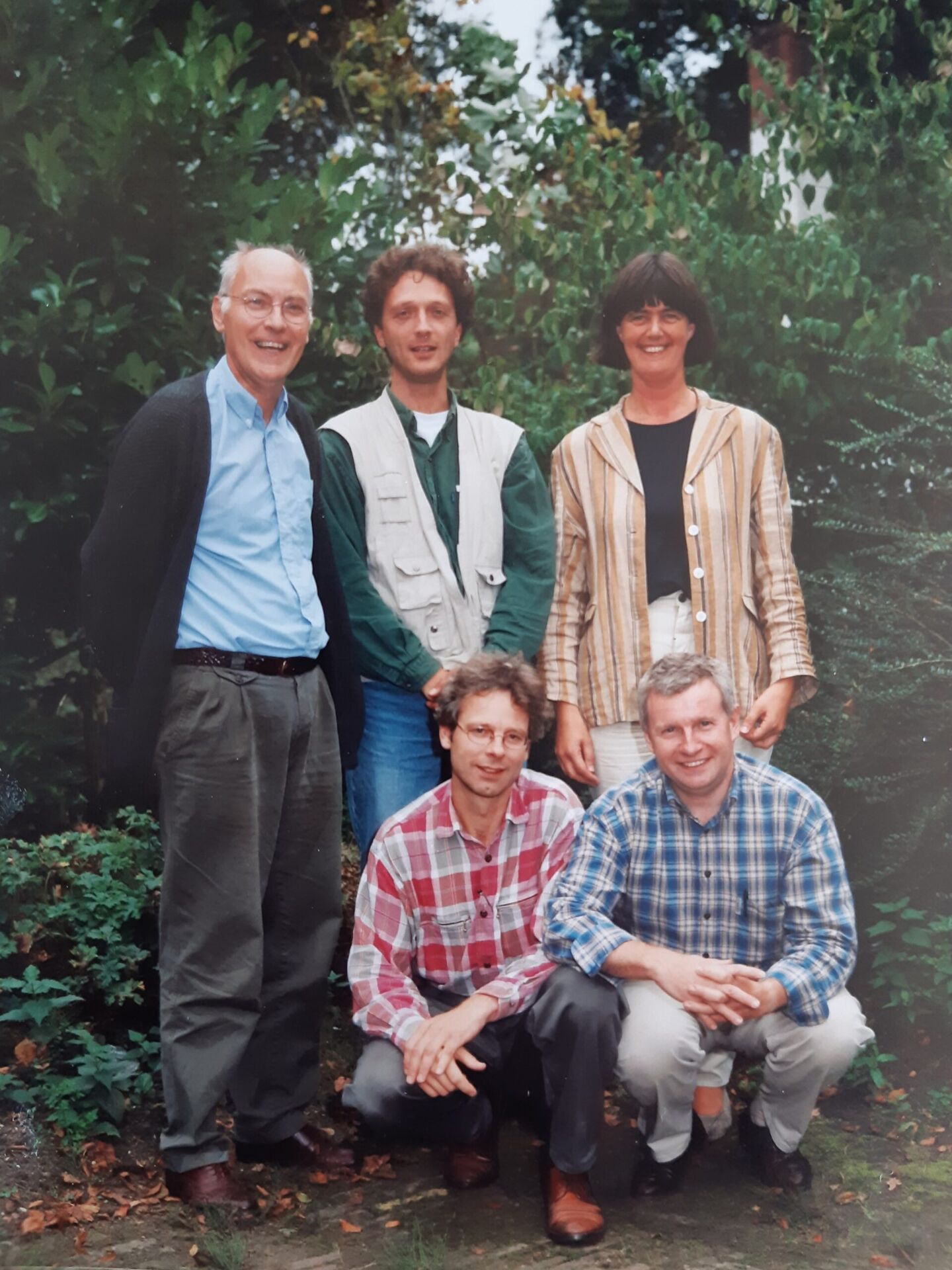 It’s March 30, 2021, a bright and even warm day! From Lochem, where I’m staying at the moment, I cycle to Zutphen to interview former colleague Klaas Terpstra.  It promises to be a fascinating conversation……

Klaas was born in Britsum in 1943, a ‘war child’. He went to secondary school in Leeuwarden and then to the Kweekschool (teacher training college). Apart from his teaching certificate he also obtained the head certificate, which offered him the possibility to become the headmaster of an elementary school, but he never held that position in the end. In 1965 he started his first job. He received a call from a school in Garijp: “Can you come?” Yes indeed! And so begins his teaching career, which will end 40 years later.

At some point he exchanged Friesland for Haren. He obtained a certificate in mathematics and then started teaching at the MULO, which was under the direction of Mr Leegsma. This is the year 1968, the year in which the Mammoetwet (Mammoth Act) was introduced and the MULO was exchanged for the MAVO. Besides math Klaas also teaches physics and chemistry (“you can do that on the side, can’t you?”). He has not forgotten the lessons he gave to a class of girls who had to follow compulsory lessons in physics during the transition phase. Teaching 30 girls, who had no affinity whatsoever with the subject, but yes….  it is compulsory. And how do you explain the laws of physics to these uninterested ladies?

In those days it was still common for teachers to develop their own methods. Klaas still believes that this was perhaps the best period of his teaching life. In those days, teachers were more or less in charge of their own classrooms and Klaas was one of many who had no problem with that.

A new building was built in Haren at the Rummerinkhof and Klaas teaches chemistry and physics in a classroom designed according to his own wishes.  The new school gets a name: De Schalm (= link) and has about 300 students. Klaas is not only a teacher but also a dean and later becomes vice principal. He likes the small scale, people know each other and the lines are short. I ask him if there was a daytime opening, because it was a Protestant-Christian school. He says that in the area of day openings etc within the school gradually less attention was paid to it. Klaas recalls that he once read the stories about Joseph from the Bible and that many children did not know about it but found it very exciting. Speaking of reading aloud, he remembers using the book by Gerard van Oorschot, in which he compiled his childhood memories, to read aloud on Friday afternoons (when the week was over and everyone had worked very hard).

Around the 1990s it became increasingly difficult for small schools to continue to exist. The government encouraged, or rather forced, small schools to either shut down or merge. Merger talks started between de Schalm, the Sint-Maartenscollege and an independent, also small, RK-MAVO in the city of Groningen and in 1992 de Schalm became part of the Maartenscollege, an interdenominational school community. What Klaas remembers well from the run-up to the merger is his task, together with a few colleagues, to draw up a joint redundancy plan. How much time that part alone took (including many consultations with trade unions). At the new Maartenscollege, Klaas becomes team leader of the mavo department and tries to preserve the old atmosphere and small scale of his former school as much as possible within the new, large-scale organization, where safety and togetherness are paramount. This applies not only to his colleagues, but also to the students, who, according to him, thrive better in a small-scale, orderly environment.

Everyone has to get used to it. Klaas, too, finds it exciting. In the first few years it was difficult for everyone involved to find their own way in addition to organizing the educational process with year after year of ‘innovations’.  If, after years of preparation, the entire school community can move into a single building, a new phase can really begin.

Klaas stays at Maartens until 2005, after 40 years in education. Time to start doing other things.